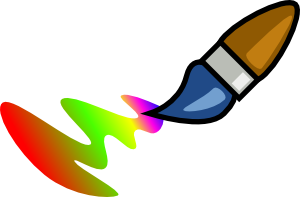 The Revelation of Jesus Christ — Put on your painting shirt and prepare to be inspired by this interesting video as Artist Debby Topliff explains her painted mural of the visions of John from the Book of Revelation. Then create your own painting of Jesus, the Ruler of Heaven and Earth, as revealed in Revelation 1.

Here are some guidelines:

1) Read Revelation 1:12-18 and list all the details that describe King Jesus.
2) Lightly sketch each detail on your paper filling up the entire page.
3) Paint your drawing.
4) Discuss the symbols using the guidelines below.

Dearest Lord Jesus, You are the Alpha and the Omega, the First and the Last, the Eternal God. I know that you will be returning sometime in the future, maybe soon, as the Ruler of the Earth. Every eye will see you — those who have loved you and those who have ignored you, those who have served you and those who have hated you. Thank you for making it possible for people to be released from their sins through your blood so that we might live and rule with you in heaven. To you be all glory and power forever and ever. Amen.

Since the Book of Revelation is the recording of the Apostle John’s visions of the end times, many of its images are symbols that are not meant to be taken literally. From the description of Jesus in Revelation 1:12-18, determine which details are symbolic and which are literal. You can tell the difference using these three laws of human language:

1) It is a symbol if the text says it is a symbol. For instance, verse 1:20 explains what the seven stars and seven lamp stands represent.
2) It is a symbol if the text uses words such as “like” or “as”. For instance, in verse 1:14, Jesus’ hair is not literally wool or snow. But it is like wool or snow in one specific way. What is that similarity?
3) It is a symbol if it is described in a very unusual way and its wording is similar to other Bible passages that interpret the same symbol. For instance, compare the sharp two edged sword in verse 1:16 with Ephesians 6:17 and Hebrews 4:12. According to these verses, the sword is not a literal sword, but rather represents something so powerful coming out of Jesus’ mouth that it is able to easily defeat his enemies. What does the sword stand for?

Final note: When verse 1:13 says that Jesus is “like a son of man,” the word “like” reveals that we are dealing with a symbol. This can be a little bit confusing, because we know that Jesus literally became a man in history. Since Jesus is both fully man and fully God according to the Scriptures, the best way to interpret the symbol is that this coming Ruler will look like a man — but don’t let looks deceive you, because his abilities and power go way beyond what a mere man can do!