24a — Transfiguration of Jesus (Bible Art) 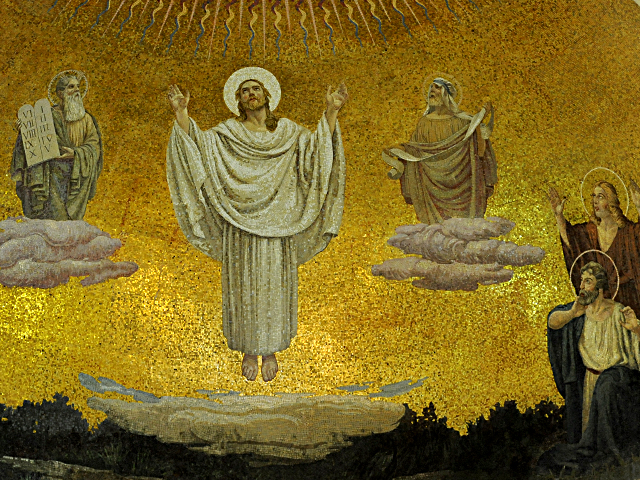 24a — Transfiguration of Jesus (Bible Art)

Jesus took Peter, James, and John with him and led them up a high mountain,
where they were all alone.

There he was transfigured (transformed) before them.
His clothes became dazzling white, whiter than anyone in the world could bleach them.

And there appeared before them Elijah and Moses, who were talking with Jesus.

Peter said to Jesus, “Rabbi, it is good for us to be here. Let us put up three shelters — one for you, one for Moses and one for Elijah.” (He did not know what to say, they were so frightened.)

Then a cloud appeared and enveloped them,

and a voice came from the cloud: “This is my Son, whom I love. Listen to him!”

Mosaic at the Church of the Transfiguration on Mt Tabor, Israel.

Suddenly, when they looked around they no longer saw anyone with them except Jesus. As they were coming down the mountain, Jesus gave them orders not to tell anyone what they had seen until the Son of Man had risen from the dead. They kept the matter to themselves, discussing what “rising from the dead” meant. Dearest Father, If I had been on the mountain with Peter, James, and John, I would have been overwhelmed also. Wow! What an amazing sight — Jesus transformed before their eyes into his God-look talking with Moses and Elijah! Thank you for loving your Son and sending him to accomplish your plan. As you have requested, I will be careful to listen to him. Amen.

1) Draw or paint your own version of the Transfiguration.