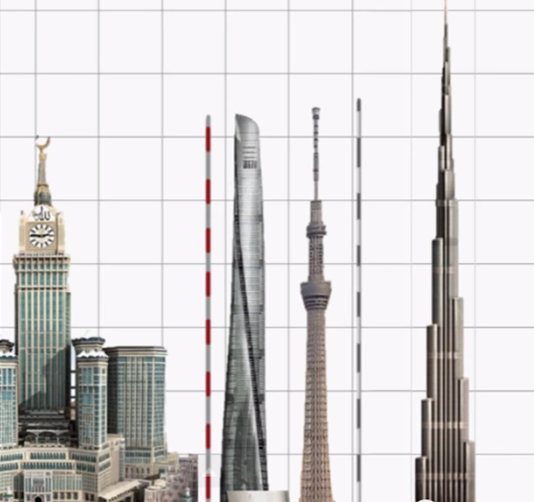 Who Can Build the Tallest Building?

Important cities throughout history have boasted the tallest building.

It all began with the Tower of Babel in the land of Shinar (Genesis 11 — height unknown). Thousands of years later, the race continues — the title going to a different city every few years.

The current tallest building is Burj Khalifa, which is 2,717 feet tall (a little more than 1/2 mile high). It was completed in 2008 in the city of Dubai in the country of the United Arab Emirates.

Watch the following video by Reigarw Comparisons to see how the heights of known buildings throughout history compare. Then try solving the calculation below about the size of the city God will bring down from heaven.

Calculate the Tallest Building from God

None of these buildings, however, can compare with the magnificent city (called New Jerusalem) that Jesus is currently building. It will descend from heaven and be established on Earth when Jesus returns — as the place from which he will live and rule with his people.

To wrap your head around the size of this city, complete the following math activity (check your answers below):

3) To determine how many miles high New Jerusalem will be, divide this number by 5,280 feet (1 mile). (Don’t forget, New Jerusalem is also as long and wide as it is tall, so its total area is half the size of the United States and 6 times as high as the international space station.)

4) If stacked one on top of another, how many Burj Khalifas would it take to match the height of New Jerusalem?

Following the prayer, watch another video produced by Listalgia that shows proposed designs for some of Earth’s future buildings and structures. Notice the height of the space tower. One of the reasons this tower has not been started is because strong enough building materials have yet to be developed.

Evidently, this is not a problem for Jesus Christ, as his building project was begun 2,000 years ago long before the discovery of modern materials and will be unveiled in the near future. But then his credentials are pretty awesome, being that he is the architect of the entire universe!

Wow! Even buildings bring glory to you, Lord! Thank you for the abilities you have given people to design and create great structures! No matter how spectacular these projects are, though, they don’t begin to compare with the city you are building for those who love you. I praise you with all of my being for your creative genius — there is no other architect like you! Amen.