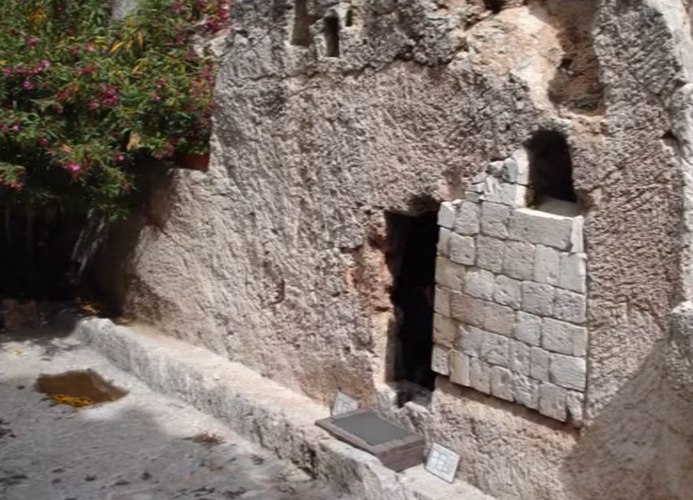 Even though Jesus lived on Earth more than 2,000 years ago, there still remains strong evidence for assigning exact locations to some of the events of Jesus’ last week.

Three of these Bible locations are:
1) Golgotha — the Place of the Skull where Jesus was crucified
2) A Newly-Hewn Tomb — that Joseph of Arimathea donated for Jesus’ burial
3) The Garden around the Tomb — where Mary Magdalene saw Jesus after he rose from the dead

Take a tour of these three sites in modern Jerusalem and marvel as the details of Scripture come to life.

1) What is the name of the gate in the wall around Jerusalem that is near the Place of the Skull where Jesus was crucified?

2) What two features provide evidence that there was a rock door covering the opening to the tomb exactly like the Scriptures describe?

3) What two features in the garden show that it existed 2000 years ago during the time of Jesus?

Dearest Father, I am amazed! The stories of Jesus’ death and resurrection seem so much more real when I can actually see the likely-locations where they occurred. Thank you for the people in the first century who recorded these events and for the researchers who have studied the locations. Thank you for leading them both. Amen.

Answers: 1) Damascus Gate, 2) There is a trough or channel for the rock to roll in and there are remains of the seal. 3) The ancient cistern and wine press