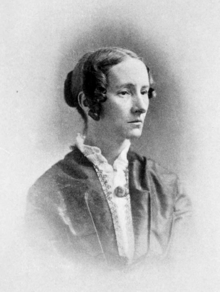 The Warner sisters rose before dawn, made a fire, boiled water for tea, and wrote every morning before preparing breakfast for their father in this home.

Anna Bartlett Warner and her sister Susan lived on Constitution Island across the Hudson River from West Point Military Academy in the 1800’s. They both were well-known American authors and wrote Christian novels, children’s stories, and religious songs using the pen names of Amy Lothrop and Elizabeth Wetherall. Sometimes they worked on books together.

For her novel Say and Seal, Susan asked Anna to write a comforting poem that one of the characters in her story would sing to a dying child. Anna penned the words of the now famous Jesus Loves Me and the book was published in 1860.

Upon reading the book in 1862, Christian composer William Bradbury was so moved by the poem that he wrote a tune for Anna’s inspired words. In addition, he created a one-line refrain that was repeated over and over after each chorus — “Yes, Jesus loves me.” The combined words and melody became a hit and is today regarded as one of the most beloved children’s songs of all time. Through the years, it has been translated into many different languages around the world. As evidence of the song’s popularity, it is recorded that natives of the Solomon Islands sang Jesus Loves Me with U.S. sailors they helped rescue and return to the U.S. fleet in 1943. Among the survivors was John F. Kennedy — the future 35th president of the United States. The natives had learned the song from Seventh Day Adventist missionaries who had established a Christian mission there in the Pacific Ocean.

Another historical memory recalls that during intense Communist persecution of Christians in China in 1972, a Chinese believer sent a message to a friend. It simply said, “The this-I-know people are well.” Since the phrase was unfamiliar to Communist censors who attempted to suppress anything that was Christian, the letter was allowed to be mailed. To those Christians who received the message, however, the line from the popular children’s song clearly identified that the Christian community in China was alive and thriving. In fact, instead of being crushed as the Communist Leader Mao Tse-tung intended, the number of Christians in China grew from 4 million in 1969 to 65 million in 2010. Jesus loves me — this I know,
For the Bible tells me so:
Little ones to him belong,
They are weak, but he is strong.

Jesus loves me — loves me still,
Though I’m very weak and ill;
From his shining throne on high
Comes to watch me where I lie.

Jesus loves me — he will stay
Close beside me all the way.
Then his little child will take
Up to heaven for his dear sake. Jesus loves me — He who died
Heaven’s gate to open wide;
He will wash away my sin,
Let His little child come in.

(Photo note: Because the camera shutter was open longer in early photography, people were instructed not to smile so they could maintain a motionless pose. Any slight change in expression would ruin the photo.)

Listen to the following rendition of Jesus Loves Me by the A Cappella Kids.

Dearest Jesus, Thank you that you love me at all times — in sickness and in health. Thank you that I do not have to hold onto the hand of fear, because you are my strong Savior. You watch over me everyday, and when the time comes, you will take my hand and lead me safely to heaven. I know these things are true, because the Bible tells me so. Yes, Jesus, you love me. Thank you so much! I love you back. Amen.